The principles of environmental justice say that access to clean air, water and soil and to a healthy, safe, livable community are intrinsic human rights. 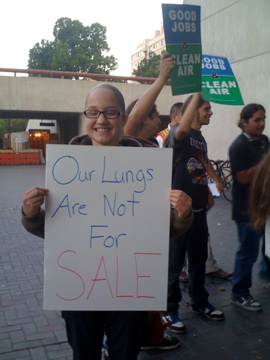 There has been a significant amount of research to show that low-income communities of color face the greatest risks from environmental hazards. They are most likely to live with local sources of industrial pollution concentrated in or near their neighborhoods and close to heavily-traveled highways (trucks and cars account for much of the air pollution in the United States).

African Americans are most likely to live in cities with high rates of industrial pollution, and within any metro area both Latino and African-American communities live with poor environmental quality.

That puts them at higher risk for asthma, cardiovascular and respiratory disease, cancer, and birth defects. And those same communities tend to be stressed by poverty, unemployment, and inadequate access to health care or healthful food choices.
That is environmental injustice.

The Fight for Environmental Justice is Global

But CBE’s vision of environmental justice is not limited to local communities or to California. The effects of climate change are obvious here and all around the world.
Climate change is hastened by greenhouse gas emissions produced by burning fossil fuels. The industrialized nations of Europe and North America have led the world in creating and maintaining economic development models that rely on coal and petroleum.

Yet local people throughout the world don’t benefit from the fossil fuel-based economies, and instead suffer ill effects related to climate change. The most devastating drought in 60 years in Kenya and Somalia put millions on the edge of famine in 2011 and forced tens of thousands to migrate.  It’s estimated that 500 million people who live in the low-lying regions of Southeast Asia—river deltas, islands—could be inundated if the waters rise due to changing climate conditions.

Deforestation also contributes to climate change.  Indonesia, now living with the legacy of colonization, is the third largest emitter of greenhouse gases in the world due forests being cleared for palm oil and timber plantations.

The fight against climate change and for environmental justice is here at home and alongside peoples in the developing world.

CBE’s vision of environmental justice is global—that’s why the organization continues to participate in such international efforts as the Indigenous Environmental Network and the Global Week of Action for Climate Justice that coincided with the United Nations Climate Change Conference in Durban South Africa in 2011.